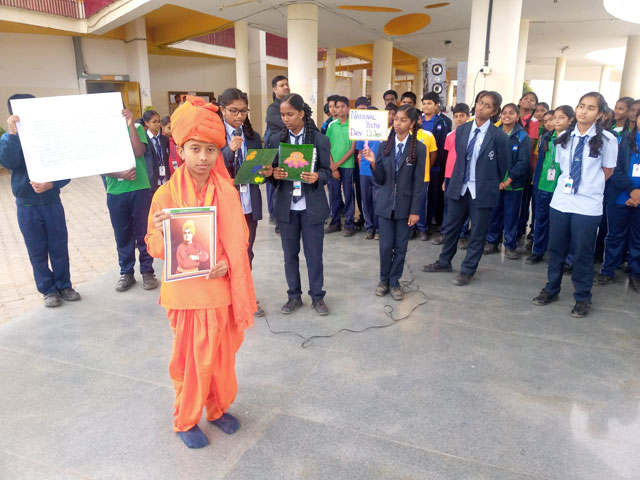 TJIS celebrated National Youth Day i.e., the birth anniversary of Swami Vivekananda on 13 January 2020. The event serves as an opportunity to raise awareness of challenges and the role of youth in creating a violent free society.

The program began with anecdotes on ideals and philosophy of ‘Swami Vivekananda’ for which he lived and worked. Swami Vivekananda stands tall as a great source of inspiration for the Indian youth. The students delivered the speech in the morning assembly highlighting Swami Vivekananda Talk at the parliament of the World’s Religions in Chicago which glorified India’s name and fame. The event ended with skit, quiz and role play by the students. 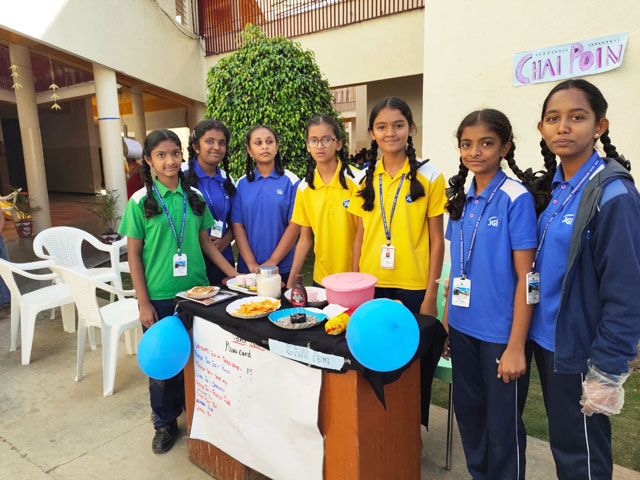 School fetes are one of the most anticipated times of the whole academic year. It is a time for rejoicing and celebrating. Every kid in school looks forward to this day with the utmost enthusiasm and fervor.

The 'Art and Cultural Fair' was celebrated by the TJIS on 10 January 2020 with great excitement, joy and fun. Stalls were headed by teachers and accompanied by students. There were slides, games, eat out, food joints and many stalls for the games. The whole concept of the fair was to provide a platform for experiencing trade, learn business skills, develop entrepreneurship and understand the economics of the country. The Bajji Stall and Greens Stall by grade 3 teachers and students won the hearts of stakeholders of the school. 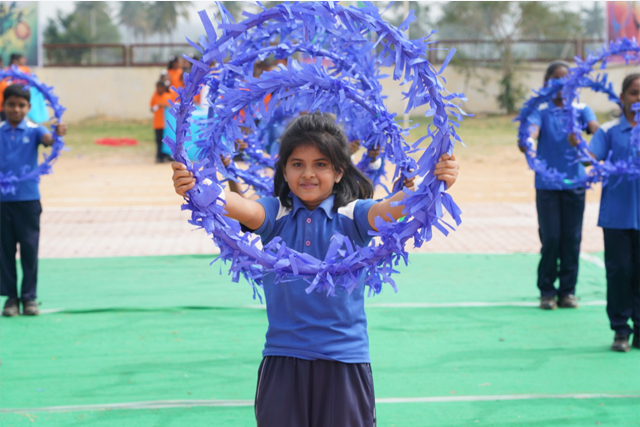 The much-awaited Annual Sports Meet was held on 23 December 2019, with great zeal, excitement, and frolicsome atmosphere. The program began with the Principal Ms. Annapurna H N welcoming the esteemed gathering and emphasized on the Importance of sports in a child’s life.

The chief guests Mr. Jagadish Reddy, Sub Inspector of Police, Mr. Kempaiya, BEO, Mr. Mahender Kumar, Managing Trustee, Mr. Vinod Jain, Coordinator, and Ms. Annapurna H N, Principal took the salute of the impressive March past of the students, coupled with some stirring marching music by the band. The spirit of the occasion was in the air and began with the oath being administered by the sports captain. The chief guest spoke about the Importance of having self-belief, being focused and goal-oriented.

The most intriguing aspect of the event was the splendid field drill, involving mass student participation by all the four housed Siddhi, Spoorthi, Srishti, and Shakthi. The students of grade 5 to 10 competed in events including running race, relays, and open race. They sprayed on the field, a riot of hues, and radiance. Siddhi house received the maximum points and bagged the best house trophy. 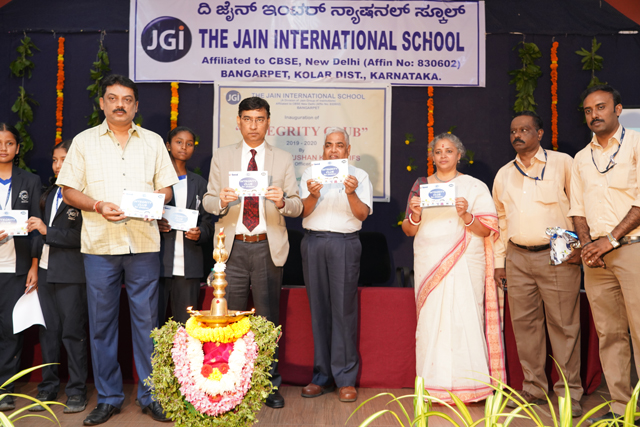 Integrity club is a co-curricular activity to rekindle human values in school children right from formative years. The overall objective of the club is to influence positive change within the school so that integrity becomes an implicit in school culture and carry forwarded by all the stake holders.The club was inaugurated on 13 December 2019 in association with BEML KGF by Shri Vidhya Bhushan Kumar, IFS Chief Vigilance Officer BEML Limited.

Shri Vidhya Bhushan Kumar sir appreciated the initiative taken by the school in spreading the concept of vigilance in the true spirit of “Integrity – a way of life”. The program began with planting of a sapling by the chief guest followed by invocation song, students pledge and release of the book ‘Integrity Club for Children’. Quiz, Elocution competitions and indigenous games were organised as a part of Inaugural ceremony. The occasion was graced by Shri Rathnaiah, DDPI Kolar, Shri B Shankar, Executive Director BEML KGF as guest of honour. Shri Kempaiya, BEO and Shri Mahendra Kumar, Managing Trustee TJIS were also present in the occasion. 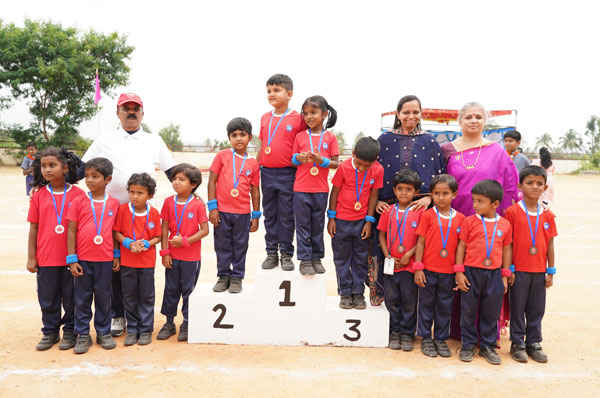 TJIS organized the much awaited Mini Olympics was held on 22 November 2019 with great zeal and enthusiasm. The event began with mesmerising march past by fundamental students followed by flag hoisting and oath which was administered by the sports captain and the students.

Mrs. Annapurna, Principal welcomed the gathering and spoke on the importance of sports in child’s life. The children entered into the spirit of the occasion and were ready for their drill performance. The kids displayed energetic and mesmerising gymnastics, yoga and acrobatics. Once the events began the children got into competitive spirit and were awaiting their turn and the air was filled with cheering and encouragement for the young athletes. The event concluded with events for parents wherein they participated with great excitement followed by the prize distribution to the winners. 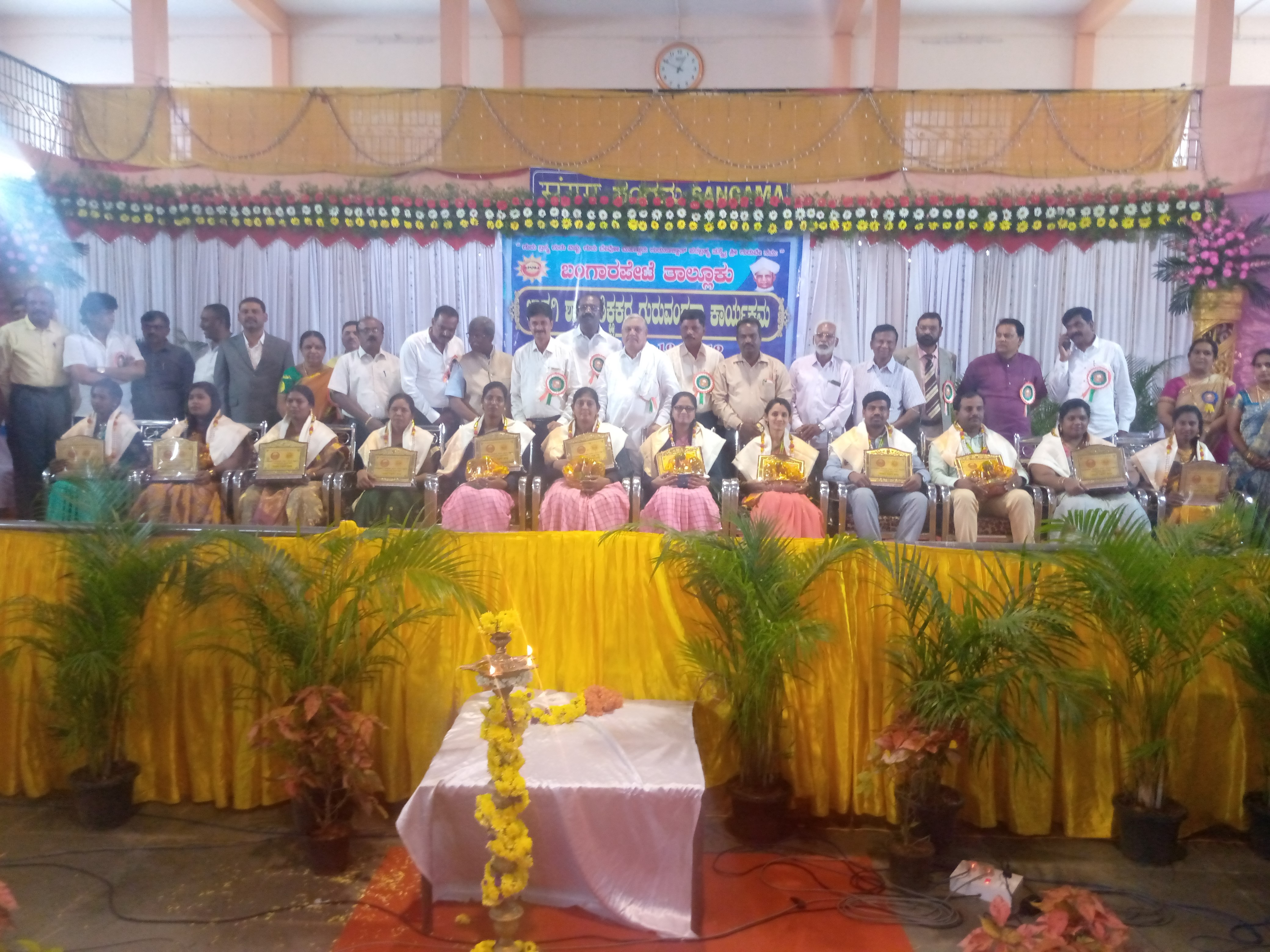 The faculty of The Jain International School were honoured as Best Teachers on 19 October 2019 at Sangam Convention Hall. The event was organised to appreciate the efforts of teachers who contribute in nation building process by educating the future citizens of the country in the formative years. The recognition and the praise for the hard work, dedication and commitment towards the profession was presented by the DDPI of Kolar, BEO & MLA of Bangarpet. The Award ceremony has indeed motivated the educators self-esteem and to develop positive professional practice and to set high expectations for the school educators.

We wish the awardees all the best in their future endeavours. 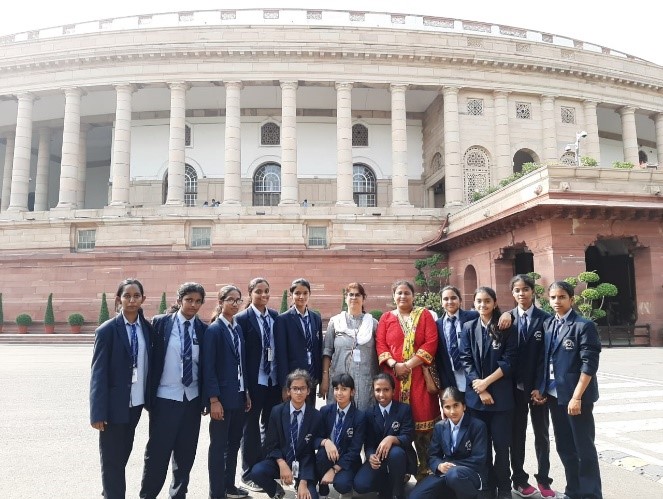 Educational Trip to Delhi and Jaipur

A week long educational trip was organised on the second week of October 2019 to Delhi and Jaipur. The fun filled trip was an opportunity to explore and learn more about the capital city of India, its rich culture and heritage.

The Highlight of the trip was visit to Rashtrapati Bhavan and Parliament. The students had the opportunity to attend the live session of the Parliament and gained real time experience of the functioning of the parliament. The students tasted the history with the visit to Raj Ghat, India Gate, Qutub Minar followed by visit to Jaipur, the pink city of India. Travelling from Bangarpet to Delhi by train was indeed a memorable journey to travel and live out of comfort zone of their parents has taught children to be independent in future. 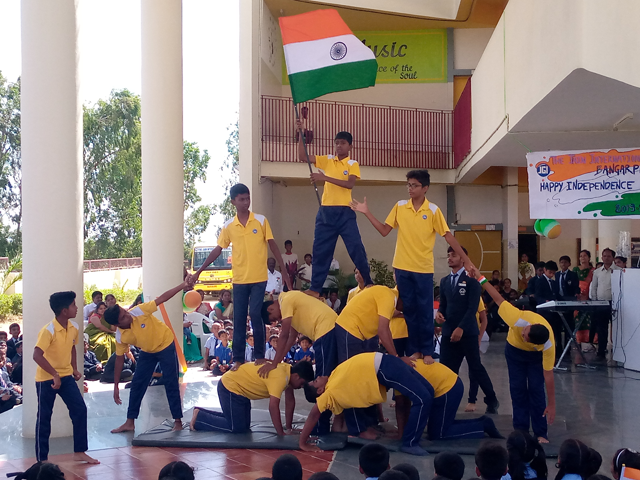 TJIS celebrated Independence Day with great enthusiasm and unprecedented patriotic fervor on 15 August 2019. The gamut of celebration activities held on the campus consisted of special morning assembly, patriotic song and impressive parade. The entire school assembled at the ground. The program commenced with the march past. Students marched in contingents to the beat of drum while the staff of the school presided over it. The cultural program followed by dance, patriotic song, fancy dress, painting, rangoli competitions was conducted by all the 4 houses (SIDHI, SRISHTI, SPOORTHI, SHAKTHI). Students actively participated in the competition.

The program concluded with speech by school head girl which included the information about the sacrifices made by our freedom fighters and soldiers for the sake of our freedom and safety, in the end vote of thanks was given by the school head boy. 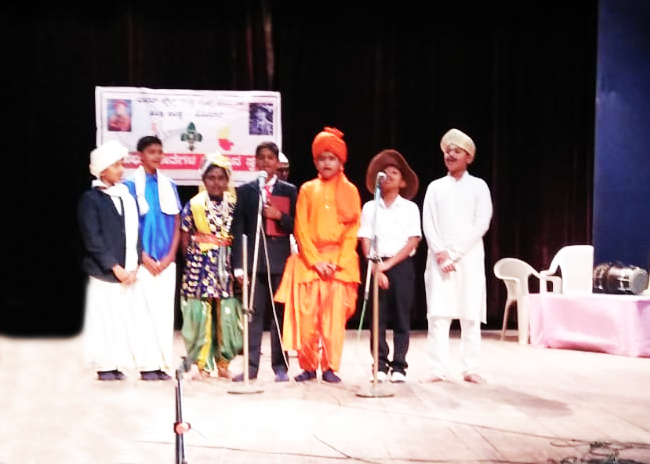 The Bharath Scouts and Guides organised the singing district level competition on 21 st August 2019 to inspire student about the sacrifice made by our fore fathers to bring freedom for our country. The students of TJIS Bangarpet participated in the event and bagged 1 st prize and also qualified to state level event.

The Eighth Kannada Sahithya Sammelana was held at Government PU College for girls on 13 July 2019. Kannada Sahithya Sammelana is a Kannada literature conference of writers, poets and kannadigas. It is held with the aim of preserving and developing Kannada language, literature, arts, culture and music. The choir group of The Jain International School, Bangarpet participated in the program and presented ‘Nadageethe’.

In addition to this there was a dance performance by Grade X students.The program was graced by Mr. S N Narayanaswamy, MLA, Bangarpet, Mr. Rathnaih, DDPI Kolar Dist., and Mr. Kempaiah B P, BEO Bangarpet. The students received a lot appreciation for their wonderful performance.

The Jain International School had organised Intra School Volleyball, Throw ball, Kabaddi and Basketball tournament on 11 July 2019 to develop harmony, sportsmanship and build healthy environment.The Tournament was started with the throw ball match followed by volleyball, kabaddi and basketball. Students participated with great enthusiasm in all the events. The Jain International School bagged the first position in Throw ball, Basketball and Kabaddi and Second in Volley ball. The day was a great experience for the students. In Short, the Intra-school tournament was a grand success by the efforts of Students, Sports Teachers and Principal.

TJIS welcomed the year’s events with the investiture ceremony where in the elected student members officially took charge of the duties and responsibilities.

In keeping with the tradition of Indian culture, The Jain International School initiated the students of fundamental into formal education through Aksharabhysam on 10 June 2019.

The Scouts and Guides department of the The Jain International School joined hands with Forest Department of Kolar district to celebrate World Environment Day on 10 June 2019.

The Jain International School’s Chair Group participated in the district level singing competition organized by the Bharat Scouts and Guides.

As Per the directives by the Central Vigilance Commission (CVC) vigilance awareness week 2018 has been observed by BEML KGF. As a part of observance of VAW – 2018 Quiz competition was organized for the Students of Kolar District.

The Jain International School hosted “The World Space Week” – 2018 on 4 and 5 October 2018 in line with the year’s theme “Space Unites the World” in coordination with Department of Public Instructions, Kolar Dist., Government of Karnataka.

Inauguration of Scouts and Guides / Cubs and Bulbuls

The Jain International School celebrated the birth of Lord Krishna on 3 September 2018. The children dressed up as Radha / Krishna which added more colour to the celebration.

TJIS students of grade 8, 9 and10 participated in the Social Outreach Program “Seed Ball Preparation” organized by the Forest Department of Kolar district.

The International Day of Yoga was celebrated to bring happiness with great zeal and enthusiasm on 21 June 2018 under the guidance of the yoga instructor, Ms. Vasavi.

On this occasion, the groups of cabinet members were invested with authority to guide and look after the students of all houses- SHAKTHI, SPOORTHI, SIDDHI, and SRISHTI.

The students of TJIS participated in the District Level Kannada Essay Competition.

Taramandala Competition was organised in TJIS to celebrate the development of Science in the world.